Overview of the Hepatitis C Coalition’s activity in 2017

It has been a busy 2017 for the Hepatitis C Coalition. Beginning the year with a new secretariat, the Coalition has endeavoured to kick-start its engagement with key stakeholders and maintain momentum towards elimination.

In the first quarter of this year, we focused our attention on amending the Prisons and Courts Bill. Working with the Drugs, Alcohol and Justice Cross-Parliamentary Group, we garnered parliamentary support in both the House of Commons and the House of Lords to add a new clause to the draft Bill, which would have required the Justice Secretary to include certain health metrics in their annual report on prisons. Unfortunately, the Bill was scrapped with the announcement of the snap General Election, but we have sought to build on the groundwork put down earlier in the year to drive improvements of testing and treatment in prisons.

The status of in-reach services in prisons formed a major part of our discussions with the ODNs and has been included in the final report. It will also be an important focus of the Coalition’s work next year.

We also increased the Coalition’s membership this year by adding the National AIDS Trust (NAT) to the roster. Their input and support has been invaluable this year, and we were very pleased that our former Chair, Professor Mark Thursz was able to contribute to their excellent ‘Tackling blood-borne viruses: A framework for prisons in the UK’.

World Hepatitis Day (WHD) took place on the 28th July, bringing the world together under a single theme to raise awareness of the global burden of viral hepatitis and to influence real change. One of just four disease-specific global awareness days officially endorsed by the World Health Organization (WHO), WHD unites patient organisations, governments, medical professionals, civil society, industry and the general public to boost the global profile of viral hepatitis. The Hepatitis C Coalition marked the day by launching our animation calling on parliamentarians to take action to achieve WHO targets to commit to our visions to test, treat, cure the hepatitis C and eliminate the virus for good.

In September, we met with the new Minister for Public Health and Primary Care, Steve Brine MP. The meeting was very productive, and the Minister said that he would like to see a strategy for hepatitis C elimination. Later in the month, the Minister announced in his keynote speech at the London Joint Working Group on Substance Use and Hepatitis C (LJWG) annual conference 2017 that he would make hepatitis C elimination his “personal priority”.

Also in the autumn, Professor Steve Ryder was appointed as the Coalition’s new Chair. Professor Ryder is Consultant Hepatologist Nottingham University Hospitals NHS Trust and Honorary Professor University of Nottingham, School of Medicine. We look forward to working with him in 2018 and would like to thank our former Chair, Professor Thursz, for all his hard work over the past three years. 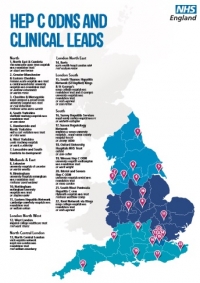 The Hepatitis C Coalition has now concluded its visits to a number of Operational Delivery Networks (ODNs) across the country. It has been a very interesting project, with trips to six different networks spanning the length and breadth of England, from Plymouth to Leeds.

The report produced as a result of these visits has now been sent to members of the Coalition and shared with NHS England, Public Health England and the Department of Health. It will also shortly be published on the Hepatitis C Coalition website.

A meeting of the Drugs, Alcohol and Justice Cross-Parliamentary Group took place on 6thDecember. The session was co-chaired by Lord Ramsbotham and Mary Glindon MP and was well attended by representatives from the substance use community and parliamentarians.

Thangam Debbonaire, Labour MP for Bristol West, spoke about taking part in the BBC documentary Drugsland and how it reflected her experiences of dealing with the reality of substance use in her constituency. Shadow Home Office Minister Louise Haigh also attended as part of ‘Labour Listens’ to hear about the group’s Charter for Change on drugs and alcohol policy. Paul North, Treatment & Addiction Policy Advisor at new think tank Volteface spoke about ‘Back Yard’, the organisation’s report on Drug Consumption Rooms, and Dr Richard Piper, Chief Executive at Alcohol Research UK, gave an update on alcohol policy. There was a lively and productive discussion around all the presentations, which made for a very successful meeting to round off the year. Other parliamentarians who attended included Crispin Blunt MP, Baroness Howe, Chris Williamson MP, and Jeff Smith MP.

The Drugs, Alcohol and Justice Cross-Party Parliamentary Group seeks to focus attention on addiction issues and advocate evidence-based policies, enabling treatment services to save and transform more lives. It has recently published a ten-point Charter for Change, calling on the Government to act. Point 10 is: “Make every prison a place of safety, reform and health improvement by increasing prison and probation officer staffing levels to provide access for prisoners to drug and alcohol treatment, provision of testing and treatment for hepatitis C and continued care upon release”.

The Group provides an interface for professional providers of drug and alcohol treatment with parliamentarians from all parties who share an interest in these issues. The Group holds regular meetings in Parliament and is supported by Blenheim, Addaction and the Westminster Drugs Project.

This year, Blenheim launched a Hepatitis C Champions scheme across their services to help educate staff and service users about hepatitis C and their strategy to support the elimination of the disease. The Champions met bi-monthly to share good practice, troubleshoot difficulties, discuss pathways and support the organisational strategy to test everyone who accesses their services. Kelly, one of the Champions, wrote about why she signed up and what the benefits are of getting involved.

Blenheim held awareness events during Hepatitis Awareness Day on 28th July and released a recovery story from one of their service users, Marcus, from Lorraine Hewitt House who supported him to get the lifesaving hepatitis C treatment and a positive future.

In 2016/17, Blenheim completed hepatitis C tests with 92% of new service users that inject drugs or have previously injected drugs. They are looking to further improve on this next year and continue to campaign for the right to access treatment.

The British Society of Gastroenterology (BSG) has just published Guidelines on Abnormal Liver Blood Tests. These guidelines deal specifically with the management of abnormal liver blood tests in children and adults in both primary and secondary care under the following subheadings:

They are not designed to deal with the management of the underlying liver disease.

The British Society of Gastroenterology Annual Meeting 2018 will take place at the ACC Liverpool from 4 – 7 June 2018. The conference will showcase the best of British gastroenterology, hepatology and endoscopy with hundreds of abstracts presented orally or as posters. This is your opportunity to share your latest research and findings with colleagues and peers. All accepted abstracts will be published in Gut, which is an official journal of the British Society of Gastroenterology. For further information about how to submit please visit the conference website.

The London Joint Working Group on Substance Use and Hepatitis C (LJWG) is working with eight community pharmacies in six London boroughs to pilot offering HCV antibody testing to needle exchange clients. Pathways have been developed to ensure anyone diagnosed with hepatitis C antibodies will be linked into care for RNA testing, further support and access to treatment. Preliminary results from the first six weeks of testing have shown a 50% antibody positive rate amongst those tested. Many of those testing positive report having had a positive test before, but not receiving treatment, indicating a gap between testing and treatment.

The surveys completed by clients highlight a lack of awareness about new treatments available with only a third of those responding being aware that treatments were interferon-free. These are only preliminary results and the full results of the three-month pilot will be available in February 2018.

Dr Suman Verma, co-chair of the LJWG said: “If we are to eliminate hepatitis C as a public health issue in the capital, we need to ensure that people who inject drugs are aware of their hepatitis C status and are supported into treatment and care where possible. These preliminary results indicate that offering testing in community pharmacies could be a vital avenue to accessing this vulnerable group. We are delighted to be working with six London boroughs on the pilot and look forward to sharing the full results and learnings from the pilot with stakeholders across London in the New Year.”